The more I learn about dyslexia, the more advantages I see to those who are dyslexic. Not to undermine the struggles that come with the condition, but the abilities of dyslexics are valuable and worth celebrating. This week Reading Horizons will focus on the strengths of dyslexics and the value they can offer to society.

One dyslexic who learned how to embrace his condition and use it to his advantage is actor Orlando Bloom. The President of the Child Mind Institute, Harold Koplewicz, recently interviewed Orlando Bloom about the impact dyslexia has played in his life.

As a child Bloom admitted to feeling stupid and frustrated with the ability. During his interview he said: "It was a struggle. It was a lot of work… I had to work three times as hard to get two-thirds of the way… I was frustrated with that learning disability. It makes you feel stupid."

At the age of 7 he was diagnosed with dyslexia, a step he found to be a great blessing. His diagnosis helped him realize he wasn’t stupid. He was lucky to receive his diagnosis during an era that realized the value of the dyslexic mind. Had he received his diagnosis during earlier generations he would not have received uplifting news. In the past dyslexia has been undervalued and often deemed its possessors as not being “normal.” Luckily Bloom was able to view his dyslexia as a gift. Dyslexia truly can be a gift. It does present dyslexics with struggles but with those struggles come exceptional brain functioning. The unique structuring of the dyslexic brain provides dyslexics with several strengths: creativity, reasoning, problem-solving, and empathy.

Bloom explained how dyslexics can use their unique brain to their advantage: "Creativity is the key for any child with dyslexia, or for anyone for that matter. Then you can think outside of the box… Teach them anything is attainable." 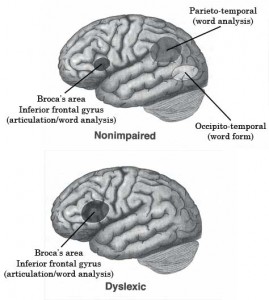 Bloom gained his success by focusing on his strengths rather than his weaknesses. In his interview he offered dyslexics advice for making the most out of the situation: don’t be ashamed and see dyslexia as an opportunity. In his own words: “Take this obstacle and make it the reason to have a big life."

Because of the struggles that dyslexics face with reading and writing, it is easy for these individuals to belittle their worth and intelligence. However, dyslexics often have higher than average IQ’s. The dyslexic brain is different in structure than the typical brain, however, this brain structuring does not impact cognition, IQ, or intelligence. In fact, researchers at the Child Mind Institute are finding a link between dyslexia and success.

There are several dyslexics that have thrived and found great success by working with their dyslexia rather than against it, including: Tom Cruise, Whoopi Goldberg, Jay Leno, Albert Einstein, and Thomas Edison.

Dyslexics can find success and offer so much to the world. In order to do this they must learn to overcome the difficulties it presents so they can focus on using their strengths. Bloom added: "It's not something that ever goes away… you learn how to manage it.” Dyslexics can learn to manage the reading and writing difficulties they face with interactive and multisensory phonics instruction.

I bought a 'Wordwiza' at a special needs conference some time ago as it looked like a fun way to help children to break up longer words for decoding. Dyslexic children in particular tend to guess from the first few letters and the overall shape of the word and I wanted them to look sequentially at all of the letters to 'hear' the word. I used it a couple of times and then put it in a cupboard and forgot about it. I came across it again the other day and put it out on the table to use with a pupil diagnosed with severe dyslexia who has a dreadful habit of 'look and guess' that I have been trying to break for some time. I showed him how he could expand the two arms to look at just a few of the letters at a time. He quickly decided to try this out for himself and was an instant expert! He skillfully expanded and contracted the arms to look at a few letters, then moved along the word to sound out the next few, then swiftly back again to the beginning of the word to sound and build the whole of it. It was a revelation! In the hands of the child I could see the full potential of the 'Wordwiza' how it empowered him and allowed him to scan just the part he needed for the length of time he needed and then go back and forth to 'hear' the whole word. A wonderful gadget. More needed urgently...... Della Reynolds, Special Needs Tutor

I've never heard of the &quot;Wordiza&quot; but I'll have to look into it. I'm glad you discovered how word decoding can work for dyslexics!

I failed the first grade because I could not read. I failed algebra five times. I failed English in the tenth grade. I graduated high school with a 1.9gpa on probation for bad behavior. I failed out of three different community colleges four times. In 1991 a college professor asked me if I was retarded -- however that same year another professor told me that I had a presence for public speaking. Now I am a college professor, and the director of one of the most successful competitive college speech teams in the nation. By being inspired to focus on my strenghts, while embracing and negotiating my challenges - like Orlando - I was able to not only come to terms with my dyslexia, but celebrate the different way my mind works, and use it for successes I never thought I would be blessed with. Duane Smith

Thanks for sharing! I'm glad you were able to see how your strengths could contribute to society, I hope more dyslexics can respond to their challenges like you did!

Unfortunately poor reading skills, and therefore poor learning skills, have become a reality for an alarming number of children.

Dyslexia is not curable, however, there are interventions that can help dyslexics improve their reading. Here is a video of Reading Horizons Dyslexia Specialist, Shantell Berrett discussing this very question: http://athome.readinghorizons.com/community/blog/post/2011/07/22/Does-Age-Cure-Dyslexia.aspx

Put our badge on your site!